A novel automated guided vehicle system designed for urban logistics and industrial applications has been revealed by Aachen-based startup DroidDrive.

The system, called Ducktrain, comprises four-wheeled light electric trailers that follow a person on foot, by bike or in a vehicle, before swarming out independently to designated delivery areas.

Able to be used on roads, cycle paths and sidewalks, the 1m-wide cars have been designed to pass between bollards and negotiate sharp bends.

As well as being used for urban deliveries, the concept has also been designed for use in factories or on closed company premises.

A total of four of trailers can be coupled together per train, and each has a maximum speed of 25km/h (15mph) and a payload of 300kg.

Furthermore, each trailer can transport one Euro pallet – the same load volume as a standard delivery van. 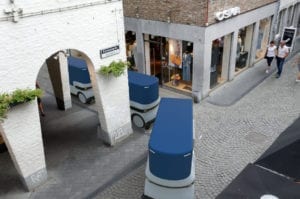 DroidDrive said it aims to have Ducktrain built in 2021, start autonomous pilot tests from 2022, and be ready for series production and road operation from 2025. 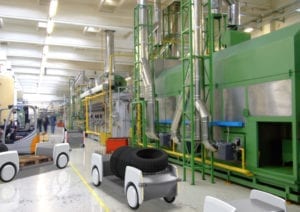 The first prototype is currently being tested by Aachen newspaper publishing house, City Logistik Aachen, and the Competence Center for Sustainable Mobility.

However, as Ducktrain has not yet received approval as a new vehicle category, testing can only be carried out in closed areas.

DroidDrive said it is currently working on the approval process with the Federal Ministry of Transport, several state transport ministries and German certification agency TÜV.

Ducktrain’s business model will involve a booking system for the vehicles, rather than outright sales. This is to make the concept accessible to the broadest possible target groups, said DroidDrive.